Rudi's cat brought this little bantam chick for us as a xmas gift on the 24th December 2008 ..

I would not like to think what this chick's thoughts were when she realised that she was caught by the cat, but the cat brought her without  a scratch as a gift to me.  It turned out completely different for the chicken, as what should/could have happened. My wish to you is that your problems would have the same happy results in the new year 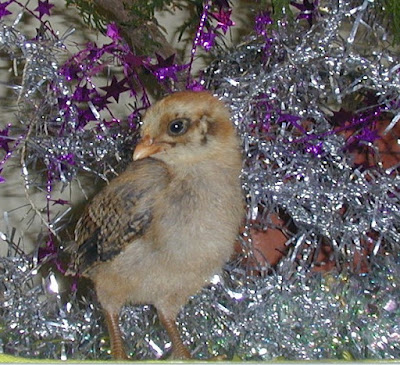 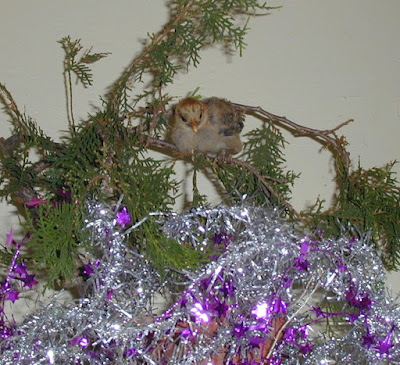 Some times you need a miracle ..
but most of the time .... no matter what stupid situation humans may get you into, make the most of it. 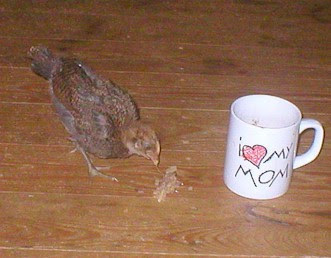 Our little bantam chick is growing a mile a minute. She more than doubled her size in three weeks but she is still small and light, compared to other foul. She is now in the "ugly" half-feathered stage. We would love to keep her but with the cats, bullterrier and foxhound she will have to remain in a chicken pen and that is not available or fun for anybody. We already found a home with other bantams for her. 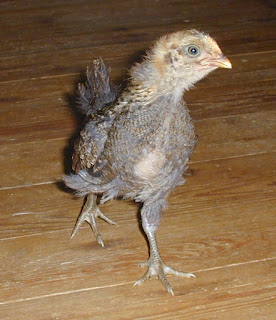 The bantams have been roaming free on the farm opposite our home for something like a century or more. Very few survive all the feral cats, house cats, dogs and humans looking for a meal.
The cocks are beautiful with long curving glossy feathers draped over the tail feathers ranging in color
from bright golden yellow - orange - dark red, as well as the glowing neck feathers. There are many more cocks than hens.
They seem to survive better by sleeping high in trees where the cats, dogs and humans can not catch them as easy as the small hen when she is brooding.
Posted by ericat at 2:55 AM