Jorian arrived from winter in Belgium to summer in South Africa.
It was during one of the hottest heat waves we had this summer the day Jorian arrived from winter in Belgium. The first day we kept him inside to get used to the climate and smells. He showed no sign of stress so the next day we let him wander around in the garden and meet the other members of this family. 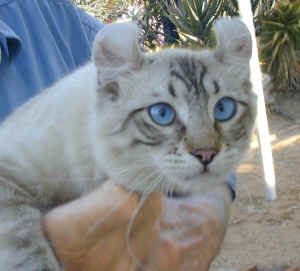 Jorian has, amongst other titels, three Grand International Champions in his line. He was bred by Josee Wijnants Ludo of CurlFantasy in Belgium. We are satisfied that Jorian is beautiful in type and sure of himself, without being aggressive. He shows promise to continue breeding the adorable loving temperament of the American Curl and adding excellent type. 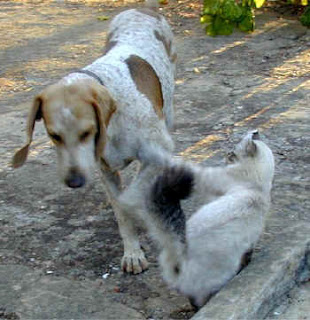 Just a catty way to say "Well hello there. Nice to meet you." That swipe of nails missed by a millimetre but that was the aim. 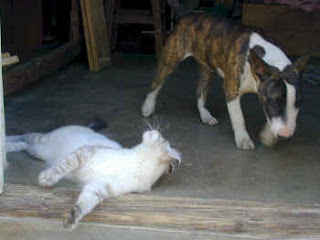 The puppy is cornered so she passes through the door with body language that is obvious even to a human. However she is not bullterrier only by name, just you wait mister cat. We had some doubts as to the safety of the puppy's eyes when the cat lashed out, but the Jorian does not lash out to make contact and both the dogs seem to know how to protect their eyes. So far cat and dogs get along fine. The older stud Enigma, is something else. Jorian very much wanted to meet the guy, so we introduced them for a short while. Enigma ignored Jorian. A six months old boy is no threat to his ego.

Everything was under control until the teenager made a major mistake.
He took liberties to inspect where it was not permitted for a minor ranking kitten.  aghhhh no! use your head Jorian ....to think !
The next moment was a whirling of dust with a black bundle in the center.   I did not take a photo,  I stripped my blouse and threw it over the black spot and was lucky the blouse covered and confused Enigma. Jorian escaped.
I did not even think to take a photo - too much damage can be done in a minute.
Jorian learned. He now looks away respectfully if Enigma is in view. They take turns playing in the garden. We will not allow them to make physical contact again. Playing with the girls is the most fun they will have and I doubt that they will complain.

Hello - I felt I had to leave a comment about your very unusual cat with the bright blue eyes. Such a magnificent animal and what lovely markings - what a delightful feline to be able to have around. Mine is a plain dsh black and white and approaching 10 years of age ... :o)

I agree That is a lovely cat, but so are most cats. I often admire the eye color, blue, green, honey, - the colors are so bright.
Black and white cats usually look like they are dressed in a tuxedo. Very smart.
I am sure you love him.

Jorian is a beauty! What lovely blue eyes he has.
Just read your comment above.. and totally agree with you. Most cats are beautiful, each one has something special about him/her.

Lovely blog.
Best regard from Belgium
My nex blog for my cat, friend my golden retriever