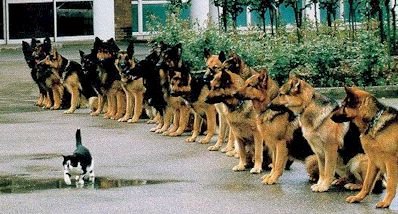 This photo above was sent around on the www. I do not think that cat happened to be passing by, he probably was part of the drill.
Even so - What is the cat saying with his body ? The cat's body is keeping a low to the ground profile. The tail is not in attack mode. That cat knows exactly the distance it needs to outrun the dogs and in this case kitty knows that the dogs are too close for comfort. He wants the dogs to know that he is not challenging them.
A cat is an expert in judging the distance to keep. Some years ago our Alsatian did not want the kitten on the front stoop. He had no problems with cats, so it was not personal. He decided that was his sacred territory. After all, the kitten had the whole house.
Whenever the kitten strolled past the stoop Mr. Dog would lie down and try to paw the small kitten ( about 3 months old) through the grid, but Kitty pretended not to notice and kept on walking in the garden just outside the iron grid, a hair's width out of the reach of the dogs paw. The dog was so afraid the kitten will walk through the grid onto his stoop, that he could not step over the 40 cm high grid and chase the kitten away. The kitten might run over his stoop.
In all fairness that dog was not stupid, he accepted the garden as our territory and he respected the fact that he will be breaking the rules chasing the cat in our garden. He never chased the cats on certain areas, and he never came into the house which he accepted belongs to the cats.
The real insult was when the kitten rolled up on the spot next to the stoop and sleep, but the dog was too nervous to sleep, he must guard his stoop. Eventually the dog just gave up one day and ignored the kitten, which was a terrible blow to kitty's ego. It took kitty days to accept the fact that the game was over.
Posted by ericat at 11:10 AM