The ancient cat in the service of man. Cats served us well by removing rats, mice and other vermin for thousands of years. Who knows where we would have been without them. For example, the plague in Europe came after cats were killed because people labeled them companions of witches. In modern times cats still look after our well being by their affection and calming us down in these hectic times, let us look after them too. 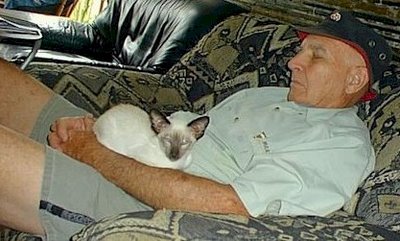 Who can be tense when a cat purrs? As for relaxing, the cat is tops in that too - photo below Michele with one of her Siamese kittens. Look at that tummy, that is one happy kitten.

The Cat lived in the company of humans possibly six to seven thousand years ago according to bones of cats, mice and humans that were found buried together on the ancient island of Cyprus.
In India cats were mentioned in Sanskrit writings around 100 B.C.. The Indian epics Ramayana and Mahabharata, of about 500 B.C., both contain stories about cats. The Indians at the time of Ramayana and Mahabharata worshipped a feline goddess of maternity called Sasti and for decades Hindus were obliged to take responsibility for feeding at least one cat. In India cats often played an important part in religious or occult ceremonies.
By the 5th century B.C., images of cats appeared on Greek coins, and they were depicted in Roman mosaics and paintings and on earthenware and shields. According to Roman Mythology, Diana the roman goddess of hunting angered the giants by taking a cat form. Many legends, folklore, myths and superstitions are associated with cats appear in the mythology of ancient Greece and Rome.
In South America, the Incas revered sacred cats, representations of which can be seen in pre-Colombian Peruvian artifacts.
Much appreciated by the Buddhists was the capacity of cats for meditation which they sensed in cats. Cats are held sacred in Buddhism, so much that they were venerated as gods in the Buddhist temples. In Buddhism, it is believed that on the death of a person who had reached the highest level of spirituality the soul entered the body of a cat. It remained there until the cat died, when the soul entered paradise.
A lot is known about the cat in ancient Egypt.
The Egyptian word for cat is Mau. The earliest representations of domestic cat were Egyptian tomb paintings and sculpture. The cat was considered to be a sacred animal in ancient Egypt, and was a pet at least five thousand years ago.
Cats were worshipped as a feline goddess named Bast, Bastet or Pasht, in ancient Egypt for more than two thousand years. The Feline goddess Bastet had the body of a woman and head of a cat. The goddess Bastet was associated with fertility, motherhood, grace and beauty. It was believed that the goddess Bastet controlled the fertility of man and beast, cured illness and watched over the souls of the dead. Aelurus, an Egyptian cat god, represented the moon. The Egyptian Sun god Ra was believed to assume the form of a tomcat each night for his battle with the serpent of darkness. The Egyptians believed that their gods took on the appearance of cats in order to pass down orders and omens.
In ancient Egypt, if a house caught fire, the rule was to save cats first and humans second. A person killing a cat was punishable by death. If a pet cat in ancient Egypt died, then all the family members used to shave their eyebrows as a sign of sorrow and the entire family went into elaborate mourning with chanting and pounding of chests as an outward sign of grief. After the death of cats they were mummified. The dead bodies of cats were then wrapped in rich bandages of various colours and decorated.The faces of the cats were covered by masks on which the nose, eyes, ears and whiskers were evident. The mummified cats were placed in boxes made of wood or bronze and these boxes were then placed in cat tombs or pyramids. Mummified rats and saucers of milk were kept near the cat mummies. In ancient Egypt, the cat mummies outnumbered human mummies. In the ancient capital city of Egypt, more than 300000 cat mummies were found in 1890.
The Egyptians believed that divinities assumed the semblance of a cat, and so the high priests decreed divine orders and omens of the future according to its behavior. The Egyptians considered that the cat's unblinking gaze gave it powers to seek out truth and to see into the afterlife. However the cats were not only sacred with a lazy life, they were used not only as hunters of mice but also as catchers of fish for their owners.
Posted by ericat at 10:11 PM